Hillingdon Libraries brings its popular Culture Bite author events to lunchtime, to help you through lockdown. 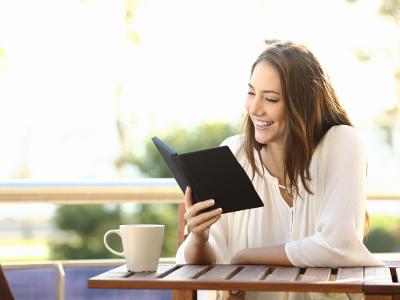 Whether you're working from home or tuning in from your office during a break, our fast, fun and friendly live broadcasts are sure to introduce you to a new favourite author or two.

All our author interviews will be streamed live to Hillingdon Libraries' social media channels, giving you the chance to put your questions to authors in real time.

Missed it live? A number of our interviews will also be available afterwards for you to watch whenever you like.

We have the pleasure of speaking with international sensation Rebecca Watson. This is your chance to ask her your questions. 'Little Scratch' is a dazzlingly original, shot-in-the-arm of a debut that reveals a young woman's every thought over the course of 1 deceptively ordinary day. She wakes up, goes to work. Watches the clock and checks her phone. But underneath this monotony there's something else going on: something under her skin. Relayed in interweaving columns that chart the feedback loop of memory, the senses, and modern distractions with wit and precision, our narrator becomes increasingly anxious as the day moves on: Is she overusing the heart emoji? Isn't drinking 8 glasses of water a day supposed to fix everything? Why is the etiquette of the women's bathroom so fraught? How does she define rape? And why can't she stop scratching?

Fiercely moving and slyly profound, Little Scratch is a defiantly playful look at how our minds function in - and survive - the darkest moments.

Former classics teacher Phoebe Wynne joins us to chat about her brand new gothic novel 'Madam' - the story of a naive teacher who is caught up in a chilling mystery at a Scottish boarding school. Madam has been described as 'Rebecca meets The Secret History' by author Sara Collins and will be published on the same day as our interview with Phoebe.

Captain John Powell Mills voyages across the oceans entrusted with conducting emigrants to new worlds, but with a mind gradually losing its hold on reality and an increasing dependence on alcohol. His passengers and crew are threatened with disaster. Based on actual events.

Bryan Kesselman was born in England and studied at the Guildhall School of Music and Drama. He has composed a number of operas and choral works. Paddington Pollaky Private Detective, was published in 2015. The Madness of Captain Mills, an historical maritime fiction is his second published novel.

Rosalind Russell is a journalist and editor with 2 decades of international experience. She has worked as a foreign correspondent for Reuters and the Independent in East Africa, the Middle East and Southeast Asia. Her reporting has included the fall of the Taliban in Afghanistan, the war in Iraq and Burma's Saffron Revolution. We talk to her to commemorate Refugee Week 2021 and discuss her book "The End of Where We Begin".

Veronica is a teenager when civil war erupts in South Sudan. Lonely and friendless after the death of her father, she finds solace in her first boyfriend, and together they flee across the city when the fighting breaks out. On the same night, Daniel, the son of a colonel, also makes his escape, but finds himself stranded by the River Nile, alone and vulnerable. Lilian is a young mother, who runs for her life holding the hand of her little boy Harmony until a bomb attack wrenches them apart, forcing her to trek on alone.

If you missed any of our interviews live, you can watch them right now, using the links below.

Katy Colins - The Best is Yet to Come

David Tossell - All Crazee Now: English Football and Footballers in the 70s

Michelle Davies - Shadow of a Doubt

Cherie Jones - How the One-Armed Sister Sweeps Her House

She Will Soar with Ana Sampson

Secrets and Lies with Karen Hamilton

Three Women and a Boat with Anne Youngson