Recycling and reusing helps raise more than £4,000 for Harlington hospice

Tuesday 29 September: Hillingdon Council's popular waste weekends have helped raise more than £4,000 for Harlington Hospice thanks to donations from residents visiting the site and taking home unwanted items that are still in a good condition. 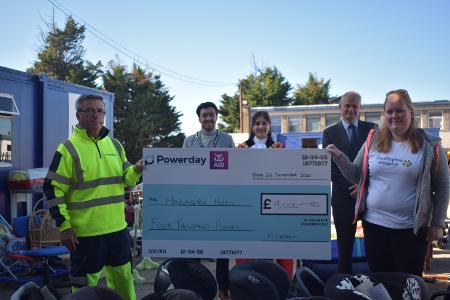 Through the Powerday Charity Shop based at the West Drayton site in Tavistock Road - where residents are happy for us to add items to the sell pile - everything from tables, chairs to storage boxes and toys, all of which have been brought to the site for recycling, have found new homes. While there are no prices on individual items, the council encourages residents to make a donation each time they take an item away. The money generated is helping to support residents at Harlington Hospice.

Cllr Philip Corthorne, Hillingdon Council Cabinet Member for Housing and Environment, said: "A huge thanks goes out to everyone for both recycling items and for making such generous donations to support Harlington Hospice, as well as helping to reduce waste and giving items another lease of life by reusing them.

"In Hillingdon, we want residents to recycle and reuse as much as possible as it helps protect the environment and is more economical. So, if you're thinking about throwing something away that you no longer need, and it's in good condition, think about donating it to the Powerday Charity Shop."

Powerday has been running monthly waste weekends at the site since 2009. However, due to its popularity, they are now open every weekend.

John McKenna, Waste Weekend Manager, said: "Powerday would like to thank all residents of Hillingdon for their kind generosity. At the end of January this year, we started taking charity donations. The idea started when someone came to the site with a car full of garden ornaments and I asked him if I could put them on display and raise some money for a local charity. The nearest one to us was Harlington Hospice.

"When he saw where the proceeds of the sale of his items were going he told me his story. He had recently become a widower and was moving down to the coast. The new occupants didn't want the garden ornaments, so he bought them here. His wife had been looked after by Harlington Hospice for the last few weeks of her life."

For more information about our free waste and recycling services, including our weekly kerbside collections and our low cost bulky waste collection service, visit www.hillingdon.gov.uk/rubbishandrecycling