Hillingdon Council has launched a bursary award for young people in memory of Tashan Daniel, aged 20, from Hillingdon, who was tragically killed in an unprovoked attack at Hillingdon underground station in September 2019. 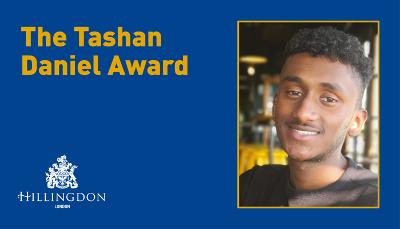 The Tashan Daniel Award will support young residents to achieve their ambitions in sport, culture and education, honouring Tashan's passion for competitive sport and sprinting.

Council funding will be allocated to successful applicants for requests including sports equipment, sports training and competing opportunities, qualifications in the arts and vocational courses in further education.

The memorial bursary is available to Hillingdon residents up to the age of 21, with support to the maximum value of £2,000 per person, per year. Individual applications will be assessed by a panel, including a member of the Daniel family.

Cllr Sir Ray Puddifoot MBE, Leader of Hillingdon Council, said: "Tashan's death was a tragedy that affected many within the local community. To commemorate Tashan's life and pay tribute to his sporting ambition, we've introduced an award that helps support young people in the borough to achieve their aspirations. We look forward to receiving applications from young residents to help with sports training or to further their education."

In addition to the award, a plaque will be installed at the Athletics Stadium at Hillingdon Sports and Leisure Complex in Tashan's memory, where he trained with the local athletics club.

Chandima Daniel, father of Tashan Daniel, said: "The family of Tashan Daniel are forever immensely proud of our wonderful son and brother. He was a bright star and believed in himself and his dreams.

"We are grateful to the council for setting up this bursary in Tashan's name and would particularly like to thank Sir Ray Puddifoot, in his efforts to get this bursary set up. We hope many individuals and groups can take advantage of this bursary and follow their dreams and aspirations as Tashan would have done, had his life not ended so tragically."

Further information is available at www.hillingdon.gov.uk/tashan-daniel-award