Thursday 14 January: Cllr Ian Edwards was appointed the new Leader of Hillingdon Council at a Full Council meeting this evening. 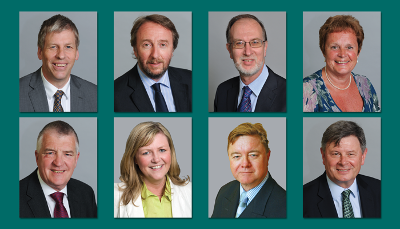 Cllr Edwards, who was elected as a councillor in 2014, has replaced Cllr Sir Ray Puddifoot MBE - the council's longest serving leader.

In October, Cllr Puddifoot announced his intention to stand down saying: "It has been both an honour and a privilege to serve as Leader of Hillingdon Council, which is now recognised as one of the best councils in the country."

Cllr Puddifoot will remain a ward member for Ickenham, where he has served as a councillor since 1998, until the next election in May 2022.

David Simmonds CBE, councillor for Ickenham and Member of Parliament for Ruislip, Northwood and Pinner, has served as a councillor alongside Cllr Puddifoot for 22 years. Speaking at this evening's meeting, Cllr Simmonds gave a vote of thanks for Cllr Puddifoot's long service to the borough.

During his tenure as Leader, Cllr Puddifoot, who has lived in Hillingdon all his life and is a chartered accountant by profession, has seen the council build and maintain financial stability despite reductions in government funding and a rise in demand for services.

This meant the council was able to freeze council tax bills for all residents for more than a decade between 2008 and 2018. For the over 65s, council tax was frozen for 14 consecutive years.

As Older People's Champion, Cllr Puddifoot has overseen the delivery of a variety of services for over-65s, including the Brown Badge parking scheme, free burglar alarms, free swimming and swimming lessons, tea dances and a free TeleCareLine for over-75s.

During his time as Leader, the council has invested millions in schools, libraries and leisure facilities, maintained weekly waste and recycling collections and the borough has received more Green Flag awards than any other local authority for eight years running.

In the past two decades, the council has also defended residents against the harmful effects of proposed expansion at Heathrow Airport and High Speed Rail 2, as well as introducing a raft of initiatives to protect the environment.

During the past year, Cllr Puddifoot has overseen the borough's response to the COVID-19 pandemic, and until recently he was an Executive Member of London Councils with responsibility for Health and Care.

Cllr Puddifoot's work was recognised in 2012, when he was appointed MBE for services to the community, and then in 2020 Her Majesty The Queen was pleased to confer a Knighthood on him for services to Hillingdon.

Speaking at this evening's Full Council meeting, Cllr Edwards pledged there would be no reduction in council services. He said: "We will continue to stay resolutely focused on putting residents first.

"We will continue to improve our roads and pavements, our parks and open spaces, our libraries and leisure centres.

"Presently though, our focus and priority is beating the pandemic, supporting residents and local businesses during this difficult time, and working with our health partners to help us return to normal as soon as possible."

Cllr Edwards also praised Hillingdon residents for coming together to support each other during the coronavirus crisis. He said: "Many have volunteered to help frontline services and others have quietly looked out for their neighbours, helping them when they have been required to isolate by the regulations or for their own protection.

"Our voluntary and community sector has played a key role in co-ordinating and shaping this community response and I want us to build on this experience and to work even more closely with our partners to deliver the support that our residents need."

In his closing remarks, Cllr Edwards said: "It is a great honour to be appointed the Leader of your borough and I pledge that I will work with the same integrity, commitment and determination that you have become used to in your council leader to ensure Hillingdon remains amongst the most desirable of London boroughs to live in."

Councillor Edwards announced his Cabinet would be as follows:

Cllr Edwards has been a resident of the borough since 1982 and is a former police officer, having risen to the position of Borough Commander for Richmond before retiring after more than 30 years' service in 2007.

He then served as a chief officer at Hillingdon Council for three years, with the responsibility for developing partnerships and supporting voluntary and third sector organisations.

Cllr Edwards became a councillor in 2014, first representing Yiewsley. Since 2018, he has been a ward member for his home ward of Eastcote and East Ruislip.

For more information about your local councillor visit www.hillingdon.gov.uk/council