Friday 16 April: A man and a woman who bred and sold dogs and cats from their home in west London have been told to pay nearly £50,000 after admitting they weren't licensed. 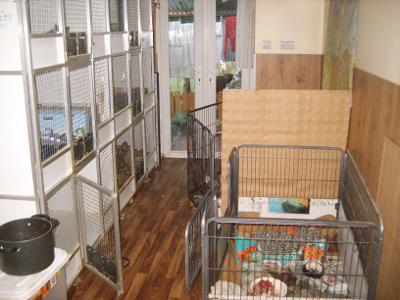 The offences related to the sale of pets and the breeding of puppies - both of which require a licence in Hillingdon.

Hillingdon Council and the Metropolitan Police executed a search warrant at Khudyakova and Tymoshenko's address in December 2018.

As well as finding dozens of animals on site, a ground floor room was filled with tiered cages from floor to ceiling, and another room was being used for animal birthing.

In the garden, a large fenced-off area contained a complex of buildings, including storage sheds and a large wooden building where cats were kept in wooden cages. Animals were also being kept in outdoor enclosures and wooden pens.

Cllr John Riley, Hillingdon Council's Cabinet Member for Public Safety and Transport, said: "It was clear from the outset that this was a large-scale, long-term commercial breeding and sales business.

"There was simply no excuse for Khudyakova and Tymoshenko not to have known about their licensing obligations and therefore I am pleased with the considerable financial penalty handed down by the court.

"We will always act swiftly to protect the interests of consumers."

If you suspect someone of breeding or selling animals without a licence, report it via licensing@hillingdon.gov.uk.