Friday 21 May: Hillingdon Council welcomed its new Mayor Cllr Chamdal after he was elected at the council's Annual General Meeting on Thursday 20 May. He replaces retiring Mayor, Cllr Teji Barnes in the prestigious role to highlight and promote the great things that happen in Hillingdon and help bring communities together. 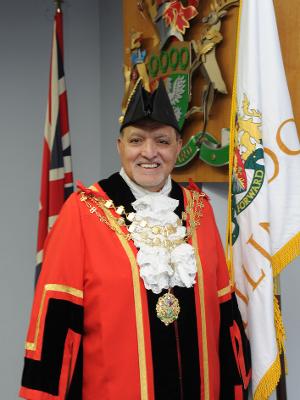 Subject to COVID-19 restrictions, the Mayor will attend local events and meet with residents and community groups across the borough. Cllr Chamdal will be accompanied by Mayoress Reeta Chamdal (his wife) and the Escort will be his daughter Evangeline Chamdal. The Deputy Mayor is Cllr Becky Haggar and the Deputy Mayor's Consort is Marios Kaikitis.

His chosen charities are Domestic Abuse Survivors (DAS) and the Navratri Garba.

He chose DAS due to the rise in incidents throughout the pandemic and was impressed by how they cared for those who turned to them for support. Navratri Garba provides free food to the those most in need. Cllr Chamdal was inspired by how the charity supports the wider community. He hopes to raise awareness of the extraordinary work that both these charities do for residents.

At the annual ceremony, Cllr Chamdal said: "It's a great honour to be elected the new Mayor of Hillingdon. I want to say thank you and congratulate our outgoing Mayor Cllr Teji Barnes who has done a fantastic job in meeting residents and community groups to help bring us all together - despite the challenges this pandemic has brought.

"I hope to continue the great work she has done and look forward to meeting many of our residents, young and old and from different communities. This last year has been difficult for us all, and I hope that with things easing that we are able to celebrate the great things that take place in our borough."

Cllr Chamdal has been a resident of Ruislip for more than 30 years and was elected councillor for Brunel ward in 2014. He got into politics to make a difference to residents. As a ward councillor, he has been instrumental in introducing an outdoor gym at Connaught Recreation Ground and children's playgrounds at Abbott's Close.

Away from politics, he is a proud father of four children and a grandson. Some know him as an avid cricket fan and he has also taken up golf.  Cllr Chamdal started his career in the food industry manufacturing samosas and Indian sweets, he then moved onto bread production and now onto cakes.

Cllr Chamdal is no stranger to making a difference, he was School Governor to Whitehealth Infants and Juniors, and also Ruislip High School where his key responsibilities were Finance and children with Special Educational Needs and Disability.

Outgoing Mayor, Cllr Teji Barnes said: "My year as Mayor has been the most unforgettable and truly inspiring year of my life. I was able to engage with Hillingdon residents through the most difficult times while we were struggling against a global pandemic. I had the chance to meet amazing people like volunteers who continuously helped others by organising food parcels, phone calls, prescription collections and a virtual hand to hold through the really dark days.

"I was able to connect to so many via my YouTube channel Mayor of Hillingdon 2020 and showcase the great work of our NHS staff, our young people, charities, libraries and open spaces. Each day felt like a gift and each meeting with someone, whether it was online or in person, made my day. There were also so many great stories of courage, determination and motivation from shop owners and new business owners of how they managed to survive against the odds.  I would like to thank my children Escort Cameron, Mayoresses Roma and Elouisa for their support during my memorable term."

If you would like the Mayor to attend your activity, please call 01895 250763 or email mayor@hillingdon.gov.uk