Monday 7 June: Two new interpretation boards commemorating the efforts of the Polish Army during the Second World War have been unveiled at a special ceremony at Hillingdon Council's Polish Forces Remembrance Garden in South Ruislip. 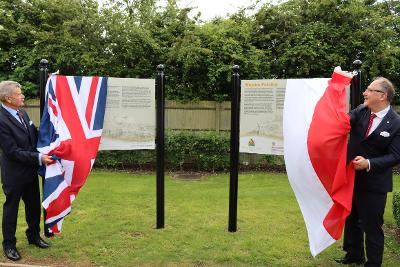 The boards were unveiled on Sunday 6 June, the 77th Anniversary of D-Day, by His Excellency Professor Arkady Rzegocki,  Ambassador of the Republic of Poland to the Court of St James's and Cllr Sir Ray Puddifoot MBE, Hillingdon Council's Armed Forces Champion.

Standing alongside the existing interpretation boards for the Polish Air Force and the Polish Navy, the Army boards complete a poignant tribute to the combined efforts of the Polish Forces in bringing about the end of the conflict.

The two Polish Army boards detail the Polish Army's contribution to the Allied effort and as with the previous boards on display one is written in English and one in Polish.

HE Prof. Arkady Rzegocki, said: "It is a great honour to unveil the commemorative boards dedicated to the Polish Army next to what is one of the most important monuments in the UK marking the Polish Second World War effort.

"The memory of the heroes who fought for the freedom of Poland, the United Kingdom and Europe is especially significant today. It is an important inspiration and shows how much freedom costs. Knowledge of history facilitates better mutual understanding and cooperation. May the memory of our heroes be celebrated forever."

Cllr Puddifoot said: "The Polish Forces Remembrance Garden pays tribute and honours the Polish Army who together with the Polish Air Force and Polish Navy played a significant part in defeating Nazi Germany in the Second World War.

"With the inclusion of a tribute to the Polish Army here in the Polish Forces Remembrance Garden in Hillingdon we hope to provide both a lasting tribute and show our gratitude to the men and women of Poland who fought for, and helped retain, our freedom."

The Remembrance Garden was opened in September 2015 by Cllr Puddifoot and His Excellency Witold Sobków, to mark the 75th Anniversary of the Battle of Britain.

The Navy boards were installed and unveiled in June 2019 by Cllr Puddifoot and HE Prof. Arkady Rzegocki.