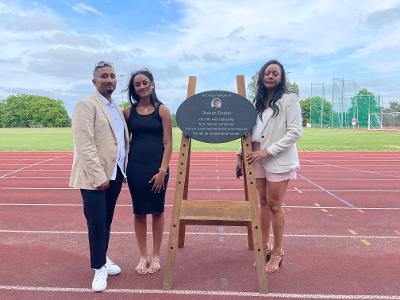 To honour the life of Tashan Daniel and his love of sports, Hillingdon Council unveiled a plaque in his memory at a moving event held on Friday 23 July.

The plaque was revealed in front of more than 100 people, including Tashan's family, friends, previous Tashan Daniel Award winners and local councillors, at Hillingdon Athletics Stadium, where Tashan spent a lot of time training in the hope that one day he could compete in the Olympics as a world class sprinter. The plaque is made of black hone granite and is oval shaped and has a ceramic photo of Tashan on it and words chosen by his family. It is now placed inside the stadium.

The Mayor of Hillingdon opened the event and was joined by Cllr Jane Palmer and Cllr Susan O'Brien, who paid tribute to Tashan. Tashan's father, Chandy Daniel, spoke about Tashan's life and how proud his family and friends are of Tashan's legacy - and how it is helping to inspire young people to excel in sports, education and arts through the council's Tashan Daniel Award. The awards scheme aims to help young Hillingdon residents through a bursary of up to £2,000.

Cllr Jane Palmer, Cabinet Member for Health and Social Care, who played a key role in the creation of the Tashan Daniel Awards, said: "It was an honour to be at this event and unveil the plaque in Tashan's memory. I hope it brings some comfort to his family and a sense of pride that his legacy lives on to inspire and help young people make their dreams a reality. It is fantastic to see so many young people with such bright futures already benefitting from the bursary."

Last year's award winners also received certificates presented by Cllr Susan O'Brien and Tashan's sister Oceanna. They included Ryan Carstairs, 15 who swims for the Deaf Olympics; Asmaa Abdirahman, 14 who is inspiring Muslim girls into athletics; Matthew Pledge, 20 who is now a local hockey coach; Ellie Riley, 19 who is developing her skills in art; Abdirahim Hamud, 16 who is the current cross country champion in Middlesex; and Sophie Harper, 16 who is a role model in gymnastics encouraging children to develop skills and get fit. Ryan, Abdirahim and Sophie attended in person.

Tashan's father added: "We felt immensely proud of what the council had put in place for our son, Tashan. We felt honoured and touched by the kindness shown by the Mayor and Mayoress and indeed Cllr Palmer and Cllr O'Brien. It was a truly a wonderful occasion for everyone involved and we are eternally grateful to the council."

Speeches were also made by Nick Marr, who has set up The Tashan Daniel Foundation, and Nick Craig.

Tashan Daniel, aged 20 from Hillingdon, tragically lost his life in an unprovoked attack at Hillingdon Underground station in 2019.