Tuesday 24 August: A Harmondsworth couple have lost their appeal against enforcement action from Hillingdon Council after being caught using their green belt land as an industrial estate for the second time in 20 years. 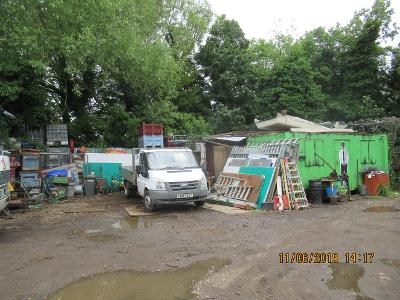 The Planning Inspectorate announced this month it has upheld the council's decision to issue an enforcement notice at Brookside on Moor Lane, which was being used inappropriately.

In May 2019, the council's planning enforcement team was tipped off that the site was being used as a scrapyard. An inspection the following month revealed portable buildings, two shipping containers, caravans,12 skips, vehicles, car parts and waste storage facilities on the site without planning permission.

This was the second time the site, owned by Anthony and Sheila Hall, had been used for industrial-type usage, having been served a previous enforcement notice in 2000 for separate use contraventions. The Halls appealed that notice but were unsuccessful and the site was cleared of all inappropriate use by 2013.

In July 2019, a new enforcement notice was served on the site requiring the Halls to cease all inappropriate new usage of the land within three months - including clearing it of the containers and skips and to remove hardstanding and portable buildings.

The Halls appealed the enforcement notice four weeks later. The evidence was heard by the Planning Inspectorate in July this year (2021) and on 13 August it announced its decision to dismiss the appeal and uphold the council's enforcement notice.

Cllr Eddie Lavery, Hillingdon Council's Cabinet Member for Environment, Housing and Regeneration, said: "We will always take the firmest action to ensure we preserve and protect the green belt which is an integral part of our borough's identity and invaluable to residents.

"People who try and flout the rules will get caught. We have formal planning procedures in place for those who wish to change the use of land and if it's deemed appropriate it would be allowed. This use however, was in flagrant disregard for the green belt, the environment and the site's neighbours so we had to take action.

"This result is the outcome of tireless work by our planning enforcement team and I commend their efforts. I'm also delighted the Planning Inspectorate agreed with our decision."

Sadly, Mr Hall passed away after the 2019 appeal was lodged. Proceedings had continued on the behalf of the estate of Mr Hall and by Mrs Hall. The appellants have been given six months to comply.