The council will fight to ensure HS2 is constructed and operated in a manner that best protects our residents and the environment.

HS2 is the Government's proposal for a new, high speed north-south railway. The proposal is being taken forward in two phases: Phase One will connect London with Birmingham and the West Midlands and Phase Two will extend the route to Manchester, Leeds and beyond.

Hillingdon Council has successfully applied for an interim High Court injunction against individuals protesting against the HS2 project on its land at Harefield Moor and Hillingdon Outdoor Activities Centre after a contested hearing on 8 July 2020.

The injunction will remain in force until such time as the High Court fixes a final hearing date when the council will be applying for the injunction to be extended.

On 23rd February 2017, Royal Assent was granted for Phase One of HS2, which comprises a new high speed railway between London and the West Midlands with stations at London Euston, Old Oak Common, Birmingham Interchange, and Birmingham Curzon Street.

The railway will run in a tunnel from Ealing into our borough, under Ruislip before emerging at Ickenham High Road. It will then travel overground before ramping up onto a viaduct over the Colne Valley. It will then descend to ground level before going into a tunnel under the M25 and further west.

The scale of the project is vast. The map below provides a brief overview of some of the main HS2 features to be built in the borough. Our borough will see a disproportionate amount of impact with no benefits and will continue to fight for a reduction in the vast amount of harm, and a mitigation package that is commensurate with the scale of destruction.

The Government's public consultation began on 28 February and ended 29 July 2011, covering the following: 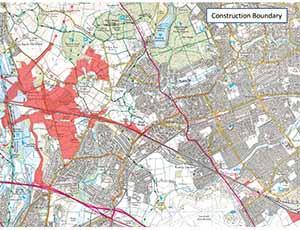 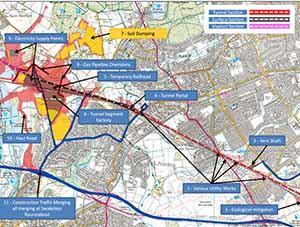 Next Page HS2 in Hillingdon updates (external site)
Was this page helpful?
Yes No
Report an issue with this page