The mace was a medieval hand-held weapon with a head made of metal spikes or ridges. It was designed for use against an enemy in heavy armour.

They were wielded in battle by bishops, whose clerical status prohibited them from using a sword. As time progressed, and armour was worn less often in battle, while the mace itself became irrelevant.

The ceremonial mace in England also began life as a weapon, but one designed to represent a higher authority - in this case, the King. It was first used by the Serjeants-at-Arms, a royal bodyguard established by Richard I.

100 years later, these maces were already more decorative than functional, encased in silver or gold. In fact, the House of Commons ruled in 1344 that it was an offence for anyone but a royal serjeant to bear a mace fashioned from precious metals.

However, by the beginning of the 15th century, the serjeants of London, York and Norwich had gained this right as a sign of their town's power and prosperity. Other boroughs soon followed, and by the 16th century, ornate silver maces were in fairly common use. 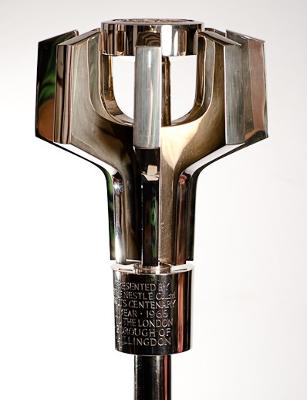 In the late Middle Ages, the head of the mace was carried uppermost, with the arms of king or borough on a small button at the base. Gradually though, the head's spikes and ridges became smaller and more decorative, while the base, with its arms, became the focus of ceremonial attention. By the start of the 16th century, most maces were carried with an enlarged base held upwards instead.

In the 16th and 17th centuries, the decoration of maces became quite an art form, with scroll-work, floral crests or heraldic designs increasingly common. The last serjeants' maces are recorded around 1650, when the mayors of important towns began to use the large ceremonial mace still common today. 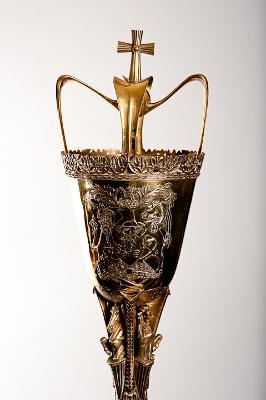 Today, these maces are usually borne in front of the mayor in procession and on various other official civic duties. The mace also precedes the Mayor when entering and leaving the Council Chamber and lies in front of the Mayor when council is sitting. When the Mayor is settled, the mace rests horizontally before him with the crown to his right hand, or in the more important direction.

The mace is always reversed in the presence of Sovereign, because the mace, as the symbol of the Mayor's authority, is redundant in the actual presence of the Sovereign. 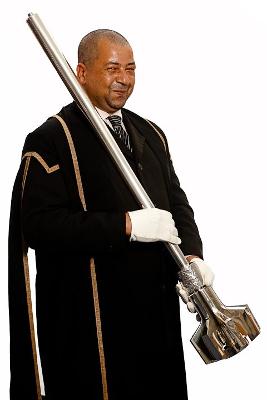 There are two Hillingdon mayoral maces; one presented the year after the borough's formation, the other inherited from the Mayors of the Uxbridge Borough Council which it replaced. They were both gifts from local businesses.

The gold mace was given to Uxbridge by well-known local printing firm King & Hutchings Ltd when the town was granted borough status in 1955. Its two stands were presented to the mayor and corporation by the Uxbridge branch of the trades union NALGO (the National Association of Local Government Officers) in the same year.

The silver mace was presented to the London Borough of Hillingdon by Hayes food company Nestle Co. Ltd. in 1966, the firm's centenary year.

Previous Page Badges Next Page Ceremonial silver
Was this page helpful?
Yes No
Report an issue with this page