Venues in Hillingdon that took part this year included:

You can view the virtual tours of the sites and venues or explore the borough using our self-guided heritage walks below.

Located across 22 acres, the site houses a unique collection of buildings, including the Grade II* listed Great Barn dating back to the 13th century.

Listen to the self-guided audio tour

Find out how Manor Farm was built

Situated on 10 acres of parkland in the heart of Eastcote village, this site contains the stables, a timber framed building dating back to the 17th century. Eastcote House Gardens won London in Bloom Park of the Year category in 2014 and 2019.

This 144-acre park contains a number of historic relics, including a cobbled stable yard, ha-ha and enclosed courtyard known as The Secret Garden and the medieval St Dunstan's Church and graveyard which is said to be haunted by the ghost of the Grey Lady.​​​​​

The Grade I listed building dates back to 1426 and was built by Winchester College as part of its manor farm. More than 95% of its structural timbers and half of the planking on its walls are original.

Dating back to 1250, this Grade I listed church features 15th century additions and Victorian restorations.

The Grade I listed structure dates back to 1086 with a Norman font and Norman stone arch, which is carved with cats' heads. 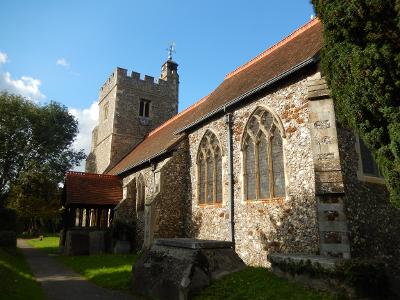 The early 19th century meeting house retains much of its original character, and was a site of Quaker worship from the late 1600s.

The hall is a Grade II listed Georgian mansion, which was originally the home of John Crosier and family is located in the grounds of the Compass Theatre.

War memorials across the borough

Take a self-guided tour of 10 of the war memorials across the borough.

Learn about the Treaty of Uxbridge in this self-guided tour.

Explore the historical stories and characters of old Hayes Town through a self-guided tour, starting from Church Green and ending at the Beck Theatre.