Medieval society was very hierarchical. The sort of clothes you wore illustrated your position in society. 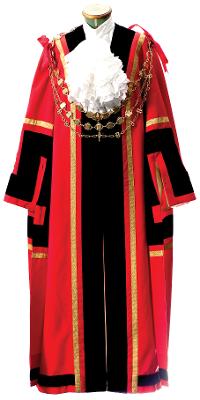 Some early Mayors modelled their robes on those of the Merchant of Craft Guild they belonged to, which was a further sign of status. The livery of the office spoke volumes about the Mayor's authority within the borough, but was also intended to rival the apparel worn by local noblemen.

Heavy red robes trimmed with fur (usually squirrel) and black velvet was the costume of choice for the well-to-do medieval man in winter. In summer, a lighter material, trimmed with silk rather than fur was common.

Some Mayors got carried away with their own importance and designed robes fit for the monarchy, inducing several kings to pass laws restricting the use of fur, velvet and so forth.

For many years, the Mayor was also chief magistrate, wearing red for royalty and momentous events and violet or blue for more commonplace activities.

With the Reform Acts of the 1830s onwards, there were changes in costume, whereby the robes of office were no longer individually designed and owned, but were passed onto new mayors as they took office.

The JABOT or lace collar historically worn over the robes is apparently an import from the French nobility.

Next Page Chain of office
Was this page helpful?
Yes No
Report an issue with this page