History of the Mayor of Hillingdon

Learn about the history of the Mayor's office.

In this section:
Office of the Mayor
Other important officials
Freedom of the borough
Town twinning
Town crier
Past mayors of Hillingdon since 1965

The town crier was an officer of the Borough court, who made announcements as required by his employers.

By 1900, the majority of people were educated, newspapers were readily available, and therefore the need for town criers as local newsmen disappeared. However, the office was gradually brought back towards the end of the 20th century, but with more limited functions.

Today, there are approximately 150 registered town criers, with many honorary or part time appointments by local councils. The modern town crier tends to be employed at civic functions or charity events, whereby his role is more ceremonial than practical. Many are also members of the Loyal Company of Town Criers and continue the art of the crier at competitions throughout the country. 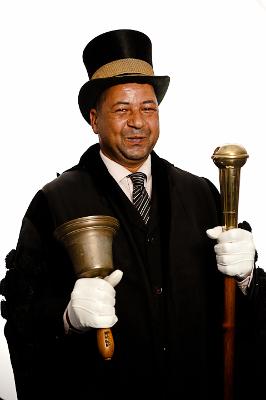 In the nineteenth century, town criers in Uxbridge had a bell and a staff. The staff is located in the Mayor's parlour, and the bell is inscribed 12 WH on the metal and HA on the wooden handle.

Charles Tamplin, a well-known town crier, was appointed to the position by Yiewsley and West Drayton Urban District Council from 1953 to 1987. His role was to publicise events held to celebrate the coronation of Elizabeth II.

Charles was asked to stay in office when Yiewsley and West  Drayton Urban District Council became part of the new London Borough of Hillingdon. He was town crier for over 25 years, winning 18 national awards and was asked to lead the Lord Mayor's show through London six times.

He was presented with a glass bell by his union, the General and Municipal Workers' Union, for fifty years' service in 1984.

Previous Page Town twinning Next Page Past mayors of Hillingdon since 1965
Was this page helpful?
Yes No
Report an issue with this page