About the Mayor of Hillingdon

In this section:
About the Mayor of Hillingdon
The Mayor's chosen charity
Mayoral protocols
Mayor's role
Mayor presidencies
Past mayors of Hillingdon

About the Mayor of Hillingdon

Councillor Teji Barnes has been elected Mayor of Hillingdon for 2020 to 2021, Roma Bell and Elouisa Bell will be Mayoresses, and Cameron Bell will be the Mayor's Escort. 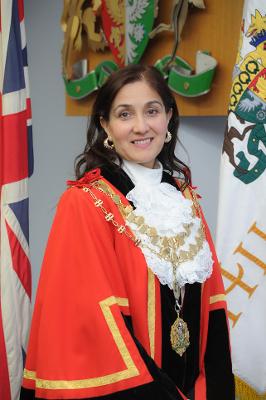 Cllr Barnes served as Deputy Mayor last year. She is looking forward to a busy year ahead in this prestigious role where she will be able to promote the positive work taking place throughout the borough.

Before her roles as Mayor and Deputy Mayor, Cllr Barnes was a councillor for the Cavendish ward, where she was first elected in 2014. She carried out this role while continuing her day jobs as a driving instructor and life coach, working with people from a variety of backgrounds between the ages of 17 and 92.

Outside of the council, Cllr Barnes has been a member of, and chaired the London Road Safety Council since 2014, which is held in the Guildhall and attended by all thirty two London boroughs. She was also a trustee board member for Hillingdon Shopmobility Charity.

Born in Tanzania, she moved to Hillingdon when she was a baby with her parents and two sisters. She lived in West Drayton and Hayes during her childhood and attended Hayes Park Primary School, and then Mellow Lane School, now known as Hewens College.

Cllr barnes began her career working in the accounts department of an industrial firm in Hayes Town, before embarking on a 15-year career at Barclays Bank, working in the West Drayton and Baker Street branches. She then moved out of the borough to work at the Edinburgh branch, which looked onto iconic Holyrood Palace.

After leaving the bank, she moved back to the borough and juggled raising her three children while being part of parent-teacher associations, governing bodies and volunteering with the Samaritans charity. She later went on to work as a teaching assistant and life coach at the primary school she originally attended, and others in and around the borough.

To support her work in teaching people to drive, Cllr Barnes gained the Professional Driver Coach Diploma and a diploma in counselling banned drink and drug drivers. She also taught classroom sessions on the benefit of safe driving for life for the IAM Roadsmart charity.

In her spare time, she enjoys yoga, spinning classes, art and reading.

Please note: at the moment, to help keep our residents safe and in line with government advice on the coronavirus, the Mayor can attend your events virtually. If you would like the Mayor to attend your activity virtually, please email mayor@hillingdon.gov.uk

Next Page The Mayor's chosen charity
Was this page helpful?
Yes No
Report an issue with this page